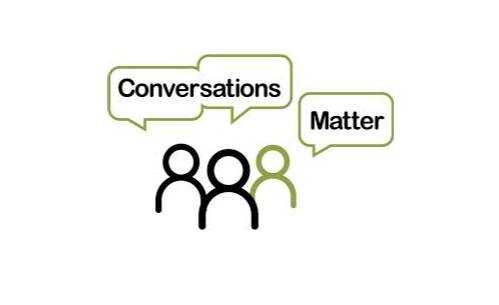 In my work helping people have courageous conversations across differences, I am often asked about how these conversations line up with keeping the peace at work or how one is supposed to just carry on after not just a misunderstanding but after very real differences in beliefs or opinions have been exposed. One of the 4 foundations – or agreements –  of courageous conversations is to expect and accept non-closure but that doesn’t mean that very real feelings haven’t been stirred up and need to be processed even as you move on while “agreeing to disagree.” One woman in one of my workshops said something along the lines of “I am so angry at him and for everything that he stands for that I can barely look at him, let alone be civil to him.”

There is a lot at stake in our disagreements and people feel that their very lives and identities are on the line – across the spectrum. Everyone from Oprah to the American Psychological Association has tips on how to be present in these very difficult, highly partisan moments. At the heart of most of the advice is the act of listening and connecting – not attempting to change someone else’s mind or to show them how wrong they are.

We know that almost no one changes their mind on any particular issue after one conversation, but that learning more about a person opens up the possibility for recognizing our shared humanity and common concerns. In Clarkston, GA, where I have worked and had relationships for the past 10 years, former refugee, Heval Kelli is a one-man ambassador who has committed to meeting and speaking with as many Trump supporters who support a Muslim ban and a general ban on migration. He lets the truth of who he is be enough – he doesn’t try to  convince, shame or pass judgement on someone else’s beliefs.

As quoted in the above Oprah piece, Chris Voss writes: “As a hostage negotiator, I could listen empathetically to anyone—even terrorists—once I realized that understanding and articulating someone’s viewpoint is not the same as agreeing with it. Decoupling those ideas is a powerful and liberating concept.”

But is simply listening to someone else enough? What about mutuality or a two-way street? Does it matter if the terrorists views are not changed? Do we just agree to disagree even if your stance holds real danger for me or my loved ones?

Brené Brown writes: “People often silence themselves, or “agree to disagree” without fully exploring the actual nature of the disagreement, for the sake of protecting a relationship and maintaining connection. But when we avoid certain conversations, and never fully learn how the other person feels about all of the issues, we sometimes end up making assumptions that not only perpetuate but deepen misunderstandings, and that can generate resentment.”

In my workshops I talk a lot about boundaries and knowing when to engage and how to invite someone into conversation. It’s hard to have meaningful conversation in 5 minutes between tasks during the work day. Relationships and understanding take time and we have to be willing to invest the time for deeper understanding, including at work.

Another point people raise with me is that they may be willing to listen but the other person isn’t. I encourage them first to be open to the possibility that “the other” is just as willing as they are given the chance. But maybe not everyone is willing.  A workshop participant once shared that they visited the home of someone who held politically opposite views and that they went with a spirit of listening and learning even though they knew the other person was not going to reciprocate.

That’s hard. There is a tension between listening for learning and yet also protecting one’s self.

So how do we listen empathetically, be true to ourselves and not erase ourselves in the face of someone else’s potential disinterest or even active hostility? How do we even invite someone into conversation? In the ideal world, workplaces would be set up for relationship building but often they are not. I know for sure that Facebook isn’t! Social media in general is not a place for constructive dialogue. It can be difficult even in our familial or friendship circles, let alone at work.

In any situation, the best you can do is to invite someone for a coffee or lunch and frame it as an opportunity for conversation: “I am really curious about your world view and wonder if you would be willing to talk with me about your beliefs and to learn more about my beliefs. Let’s begin with the agreement that we’re not trying to convince or change the other but just to hear the other. What do you think?”

Having the courage to invite someone for deeper conversation with a truly open heart, sense of curiosity and vulnerability is hard. And building the trust takes time. But at the end of the day, it is relationships that form the foundation of human existence – at work and at home. As Gregory Lewis writes: “It’s easy to think that courage and vulnerability only apply to our personal development and personal relationships—not the professional self that we bring to work…. A more courageous culture means colleagues can have discussions that are uncomfortable yet crucial.”

None of this means that you will end up agreeing or seeing eye to eye – it’s very possible that people will continue to hold views and even work and vote in ways that further their own view point at the expense and detriment of the other. The hope in these conversations is to at least  better understand that there are real people experiencing real impact and perhaps the knowledge of that person’s differing experience will plant a seed for future understanding. But that seed can’t be planted without the conversation.

So take heart, find courage, and invite someone into conversation.

Let me know how it goes.