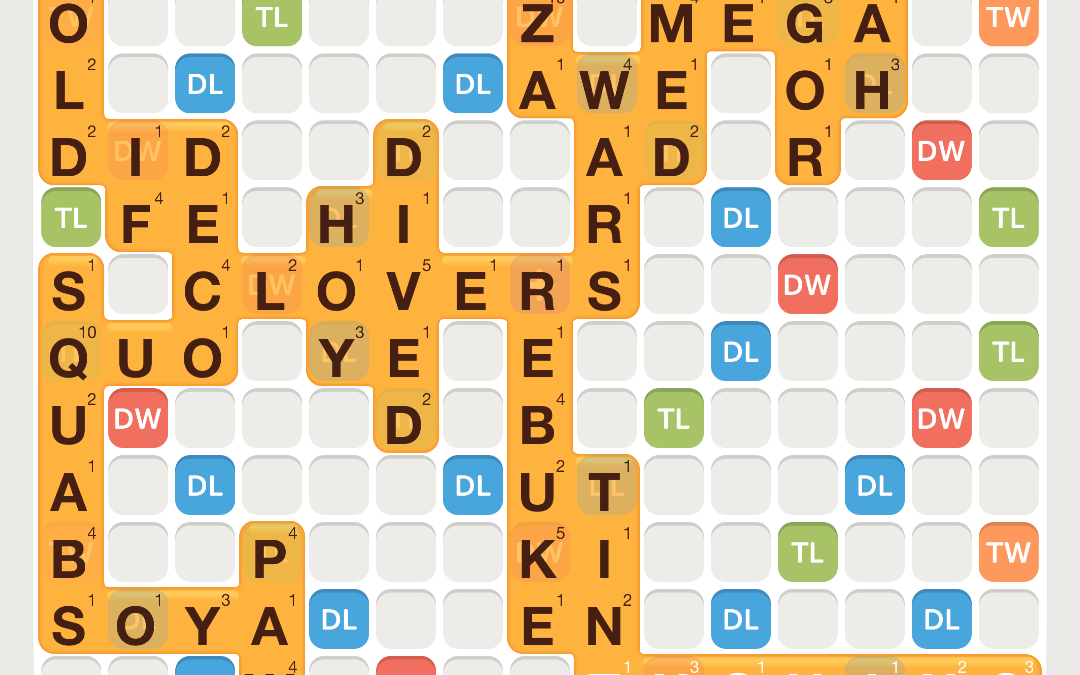 My beloved and I play Words with Friends – an online game that vaguely resembles Scrabble. Words with Friends is way looser and allows you to play words like “ut” or “thouing” – words that many dictionaries don’t recognize and certainly that you never use in casual conversation. (Google spelling currently has them highlighted as unacceptable words though I did check to see that thouing is in the Oxford.) You put your letters on the board and the app tells you whether it is an acceptable word. Some clever word knowledge is useful but it’s really about arranging the letters until a word is deemed acceptable.

My honey has played way more than I have but we are still pretty evenly matched – in fact, for our most recent games, I have 5 wins to his 2. However! It turns out that Words with Friends is also Words with Privilege in that there is a perfect lesson in privilege built into the game.

In normal Scrabble and in what I thought was normal WWF, if you swap tiles, you lose a turn. Everyone knows that. If your tiles are awful, sometimes it’s worth it to selectively dump and pick new ones in the hopes that the risk will pay off. Sometimes it does, sometimes it doesn’t. But it’s an option equally available to both players with equally distributed consequences – that of losing a turn. Turns out, WWF has a different set up.

Yesterday we were playing WWF while picnicking in the park before a show. My sweetie is hunched over his phone, brow furrowed, working really hard to place his 7 letter word on a triple word score but it’s a no go. He taps to place letters, recalls them, arranges them in about a million ways. (He often takes forever on his turns – a fact that drove me so crazy IRL games that I imposed time limits. We rarely play WWF IRL together so the time doesn’t matter. But we were playing in the park so I started to get impatient.)

“Got it!” he declares triumphantly.

“Yeah, a seven letter on the triple.”

Let me interject here that you don’t get the same extra 50 points for playing all 7 letters that you do in Scrabble so it’s not as  big a deal point-wise though you do get all the accumulated points from your letters, multiplied by 3 if it’s triple word. He had racked up 60 points.

“How did you swing that? I asked.

“I swapped my tiles.” he said

“I swapped my tiles. You know, like you can do once per turn.”

“I can’t do it once per turn!” I exclaimed. “It has to do with your “coins” and I only have 10 coins and it takes at least 15 coins which I either somehow have to earn or buy. If I swap tiles I lose a turn!”

“Where did you get those?” I demanded to know.

“So you can swap tiles once per turn every turn if you want?”

“I’d have to buy coins to swap or lose my damn turn. I’ve been stuck with my crappy letters for multiple turns and you’re over there just blithely swapping tiles whenever you feel like it?!”

I started to tease him and hurl insults among which were accusations of male privilege and then I stopped to really think about the privilege part.

Thus this post. I imagine he earned his coins by playing for way longer than I have but he actually has no idea where they came from. These coins provide him with a significant advantage which there is no way for me to overcome. No matter how hard I work, I will not be able to swap my crappy tiles without consequence while he can swap tiles every turn to try to increase his word score.

Just out of curiosity, I searched online – how do I earn coins in WWF? I got this response:

“Depends of course on which device you’re using. Some people can’t collect them at all. But If your device allows you to collect them, then every day you play you get some. Winning gets you a few. Losing gets you fewer. Completing various challenges can get you a bunch. Of course if all else fails you can go to the store and use your hard earned cash to buy as many as you want.”

“Some people can’t collect them at all.”

Privilege in action. Granted, he had earned his coins by being slightly addicted to the game and playing way more than he should, so it’s not a totally unearned advantage, but it is a perfect representation of how privilege manifests and is justified.

He happened to have a device that allowed him to collect coins. Someone else might have a device that doesn’t allow them to collect coins so there is no way for them to build their advantage. Others might play only infrequently and thus not have access to the free coins to allow them to swap their low point tiles. Sure, if they are stellar players and work twice as hard with their natural talent, they will win games (like me, for example – I have beaten him more times than he’s beaten me – hah!) but if they end up with all one point tiles again and again, which can and does happen frequently, and the other person is over there swapping out their tiles with no consequences…

So yeah, privilege. “You mean you can’t just swap your tiles?” he asked innocently.

“No, I can’t just swap my tiles!” I retorted furiously.

Privilege is often not seen by those who have it. It is taken for granted, with a player often just assuming that someone who is not winning at Words with Friends just isn’t as good a player, or has been unlucky with their tiles, or just doesn’t care as much. People entering the game for the first time have little hope of accruing enough tiles to provide the proverbial level playing field. They also get fewer rewards for their wins. Sound familiar?

Because my honey is a good guy, he has agreed not to swap his tiles without accepting the consequence of a missed turn thus leveling our personal playing field. If only it were always that simple…

But because it’s not and because aspects of privilege permeate our society, the next time you assume that someone is just not as good a player as you, check your privilege!