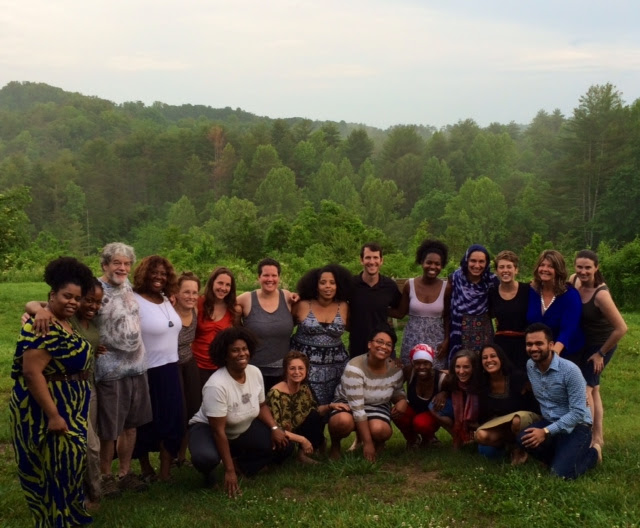 So begins the teller of tales: “Once upon a time there was a people on the edge of destruction: personally, globally and environmentally. These people lived out of relation to the Earth and each other.”

When the children hear this, they are wide eyed with wonder. “How could this be?” they ask. “What happened?”

The teller nods at their questions. “Yes, children, this is the way it was. Pollution, destruction, disconnection. It was a sad and lonely time.

And what happened was that one by one people began to create new systems, new ways of being and new stories. They began to dream a new world into being and put energy behind creating it.

And it was hard, Children, hard indeed. But these brave dreamers kept sharing the story and offering the possibility, the tools and the way to more people. Person-to-person it spread. Imagine each person reaching out and holding another person’s hand.

“Just like we do on Interdependence Day! Where everyone holds hands, everyone!”

“Yes. And that’s how Interdependence Day started. One of the wise said, ‘It’s hard to be mean to someone when you’re holding their hand.’

Interdependence Day started small, just 21 people holding hands. But each of those 21 people held someone else’s hand and those 42 people reached out and those 84 people, and soon, across the world, 7 billion people put down their tools, their guns, their iPads, their shovels, their knives and held hands. The planes landed, cars stopped, battles ceased, people looked up from their electronics and stood where they were, holding hands. Each person looked at the hand they were holding, connecting across time and space, a rainbow of peace and possibility.”

“What happened next?” asks a child, “Did they dance and sing?”

The storyteller pauses, closes her eyes and says a prayer for the brave ancestors who un-paved the way, who dared to dream and who worked tirelessly to bring the New Way into being.

This story came to me in 2014 after sitting in circle with visionaries and listening to the Appalachian mountains and land during a YES! Jam while contemplating a vision of the future — one that embodied the world we want to see, where every seed we are planting today has come to fruition. It seems worth re-visiting today on this day following the July 4th holiday.